This week has been a little different than most other weeks. One thing is that I haven't really been crocheting as much as a usually do and not so much because I've had other things to do but its more because I was having a couple of lazy days. Maybe its because Thanksgiving is coming up.

Anyway I didn't take a picture but let me tell ya'll I have a ton of body parts all over my desk of animals and monsters than need to be sewn up. I really don't even know where to start. I have a couple monsters that I started back in October that I never got around to finishing probably because after Halloween it just didn't seem like the right thing to work on but they need to get finished.

I also started working on some new animals that go perfect for winter and Christmas that I plan to list in my shop in the next couple of weeks. My plan is to get some crocheted, sewn and get pictures taken this weekend and then I can start editing photos and upload them as I finish. 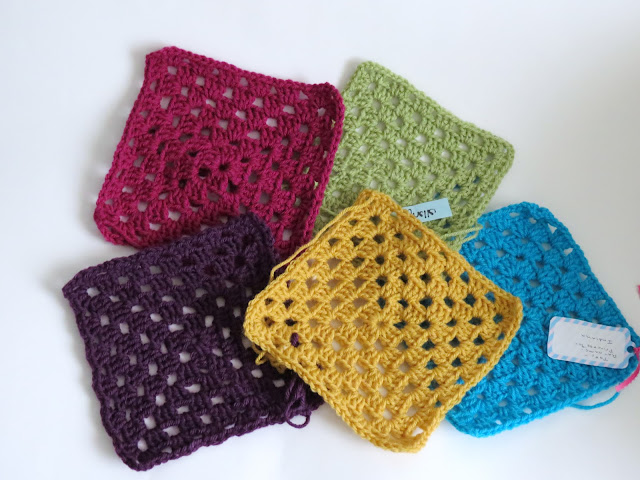 Another project that is on my to do list is the Freshstitches Cowl I talked about last month. I got these 5 squares from other people and now all I have left is to finish it up. I love the color I think its going to look very pretty. I think I may do a border so it will take me a while to get around to working on it. Plus I need to buy some yarn.

The last thing on my to do list is to get started on crocheting the parts for the Freshstitches Mystery Cal that started last Thursday. The second clue comes out on Thursday. I may wait and crocheted all the pieces at the same time.

I know I don't have a lot to show today but I am excited to announce that on Friday I will be showing my first self designed animal that I finished over the weekend. I also finished another owl so that's confirmed for Friday as well. I won't make any promises that anything else will be finished by then but at least those two will be.

Posted by Adrialys at 3:10 AM
Email ThisBlogThis!Share to TwitterShare to FacebookShare to Pinterest