For today's post I wanted to share with ya'll a new storage system that works really well for me. This post is really long but I hope its helpful or at least somewhat interesting :) 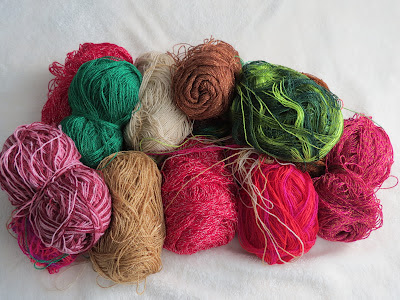 I buy a lot of thread every time I go to Mexico and its gotten to a point where I couldn't figure out a good way to store them until now. I use these for needle punch embroidery that I learned from my aunt. I'm not sure what fiber it is but its a very fine lace weight thread. As you can see in the picture above it can get tangled easily if you don't have a good way to store it. I buy a lot of it in Mexico because its not sold here in the United States at least not in my area. Of course you can use this method to store other kinds of thread and yarn as well. 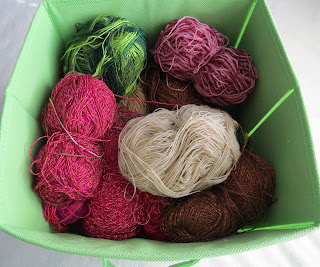 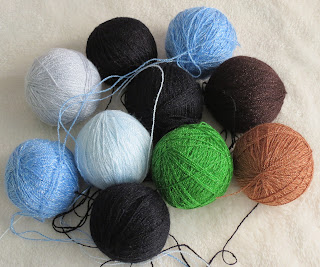 I have tried several different ways of storing them and until now none of them have worked. I put them all in a bin and they got tangled. I would wind them into balls by hand and that didn't work either. I wanted to find a way to store them that would let me see all the colors I had available to use and both of these methods did not do that because I had to dump them all out onto the table to be able to see the colors and that only made them get tangled even worse

The latest storing idea I used was winding them onto cardboard bobbins I made that are about 3 x 4 inches and put them in a drawer. It looked a lot neater as long as all of them were in the drawer but if some were missing they would fall over. I also usually take all the colors I will need for a project and put them in a bag so the cardboard didn't look as neat after being tossed into a bag. So I knew I had to find another way to store them since I am kinda of a neat freak. 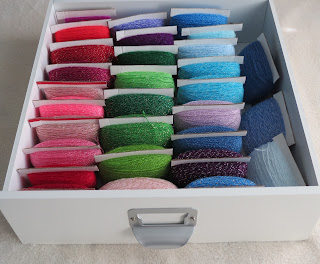 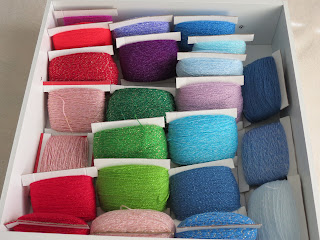 I mentioned in another post that I had gotten my ball winder from KnitPicks last Friday and immediately started to test it out. Since most of the yarn I have doesn't need to be wound up into a ball the only other thing I had to wind up was this thread. Of course the idea wasn't to wind them all up but when I saw the solution to my storing problem I started to do just that. They fit perfectly into the drawer. This drawer is one of those Scrapbook Storage Cubes that they sell at Micheals and other craft stores. 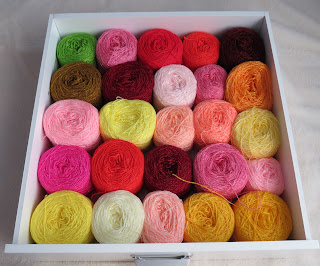 I liked this idea much better than any of the others but then I went to Michaels on Monday to see if there were any good sales going on since it was Labor day and I had gotten a 20% off your total purchase including sales items coupon. I had bought this Iris Scrapbook case that is supposed to be for holding 12 x 12 paper a while ago for my paper and when I saw them on sale I decided these would be much better for holding the balls of thread because I would be able to see them all without opening a drawer. Regular price they are $8.99 and it was on sale for $3.99 so with the 20% off coupon I got them for about $3.19 which means I saved a total of $5.80 on each and I got 5 of them. I put in the thread and it works out perfectly. 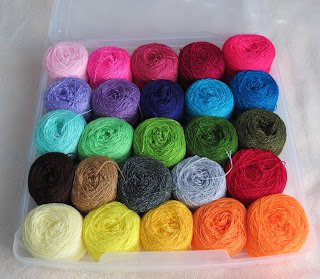 I prefer the clear case but if you want to put them into drawers that works really well too. It just depends on whether you want to label the drawer or just be able to see the colors through the box. In the picture below I have the colors all mixed but my plan is to have each box hold the different shades of a certain color. For example all the blues in one box, all the greens in another and so on. If I would have used the drawers that would also work out because I could just label them with the color that goes inside. That way I wouldn't have to go through all of them to find the color I am looking for.

Okay so now that I had the boxes I need to find something to put them in. Lucky for me the Scrapbooking Storage section at Michaels already had one available for me. It is a little pricey at over $70 regular price. Of course if you really wanted one you could buy it with a 40% or 50% off coupon. It was actually already on sale that same day I bought the cases at 40% off and then I had the 20% off total purchase coupon also.  As you can see in the picture below I already have them separated by colors. I put all the yellow and orange in one, the pinks and reds in the second, blues and purples in the third, greens in the fourth, the neutrals like black, white, greys, and browns in the fifth and the sixth one has the multicolored ones. I know I'm missing one because I didn't really check how many fit I only got the ones I thought I needed. I will get another one on my next trip to Michaels and will use it to store a different type of thread. 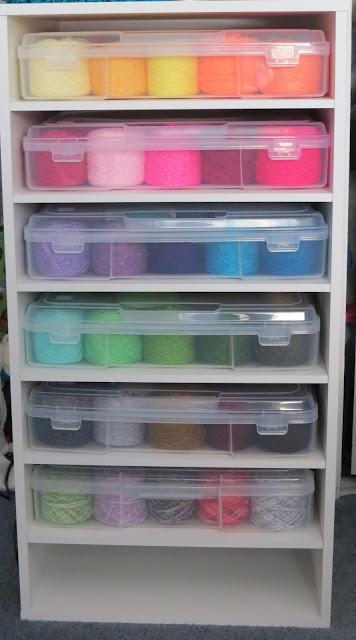 Like I said at the beginning this storage system not only works for the type of thread I am using but for any others that you might have. Another type of thread that I have been looking for a good storing solution was Aunt Lydia's size 10 crochet thread. I went through a phase where I wanted all the colors available. I used these when I was learning how to tat. It was easier to use these because they were cheaper and thicker which made them better to use since I didn't have experience enough to use the thinner and more expensive tatting thread. 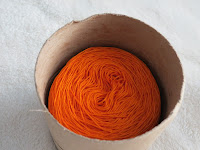 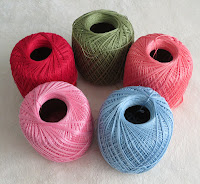 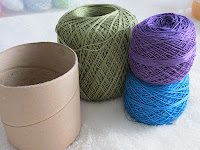 One thing I really disliked about them was that they were huge and it took a lot of space to store them. So then while winding up some balls I thought it would be a good idea to wind up one of these and see how that worked out. Basically two wound up balls are about the size of one of them and they fit into the cardboard cylinder that hold the thread. Meaning that they are easier to store. I still have many more to wind up but here are a few that I have done and put in another clear scrapbook case. I'm pretty sure they will all fit into one so I thats perfect since I have one more space available. They wind up pretty quickly and I'm sure anyone who had a ball winder and a lot of this thread will prefer having them smaller and easier to store. 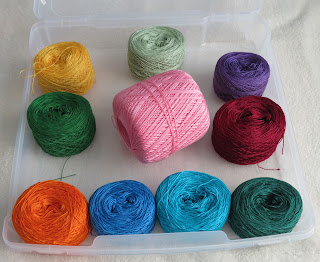 I also have this Omega crochet thread I brought back from Mexico which is actually small enough that they fit into the box already laying down or standing up right. I think I will actually put these into the drawer instead. Since I have no more room in the clear boxes. 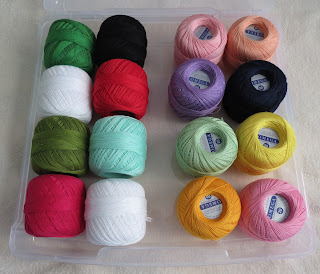 Now that I have gotten better at tatting I started buying Lizbeth Tatting thread. My collection is really small right now but eventually I would like to have a lot more colors and these clear boxes would be prefect for storing them also. These are also really small so no ball winding is needed and you can store them sideways which I think will fit more into a single box or up right works also. 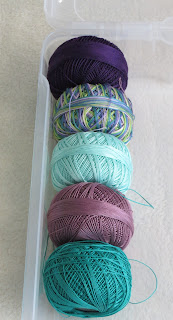 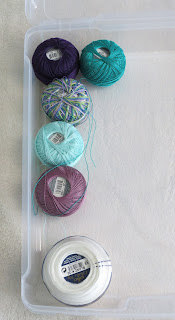 The last item that I found also works well in these boxes is regular yarn. Here I have some KnitPicks cotton yarn wound up into balls and since they are 50 grams each they are small enough to be stored in these boxes. I also put a ball of Sugar n' Cream which you can find in any craft store and those fit in there as well. So do the Hobby Lobby brand I love this cotton which is wound up into a ball.  I put two balls of Cascade just to show that those fit in also and lastly I have five balls of Caron Simply Soft. These are not the full ball which would be to big to fit but as you use them up and wind them into smaller balls those will fit in there perfectly. Since I make a lot of stuffed animals I have a lot of left over yarn that needed to be stored and I think this is a good way to go. 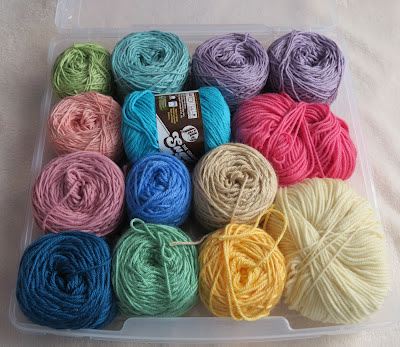 I hope that you found this storage system interesting and maybe even helpful in case you need a way to store any type of thread or yarn that's small enough to fit in these boxes. They are a little over 3 inches in height in case anyone was wondering. I have found that many of these scrapbook storage systems work really well for storing knitting and crocheting items as well. This isn't a very cheap method of storing but if you can spare a couple extra dollars you might want to consider looking into it. Of course if you didn't have a lot of thread you could just buy one or two boxes to store them in and put them into you closet. There is no need to buy the complete set. :)

Posted by Adrialys at 9:59 AM
Email ThisBlogThis!Share to TwitterShare to FacebookShare to Pinterest