WIP Wednesday: A lot of purple!

Like my title says there is a lot of purple in today's post. It was not intentional but somehow both of the projects I started this weekend are using purple yarn. The first I started yesterday and its Igor the Tiny Bat, a Freshstitches pattern. For those who follow Freshstitches on ravelry or any of her other sites should know about this pattern already. But for those who don't, this pattern will be released in early October and she has asked me to test it out. Of course I was really excited because I would get to work on it before it came out but I also have to make sure and read the instructions carefully in case there is a mistake somewhere. So far I only have the wings in purple and the color I will use for the body will remain a mystery until FO Friday when I show him completed. This next one is Ivo the Seahorse which is one of the patterns I bought during the Freshstitches 4 thousand fans on Facebook Sale. The sale was 40% off all patterns for 4 hours only and I was lucky enough to get 10 patterns. I think I saved about $16. I am planning on getting the big bundle she offers on etsy so I picked patterns that were not in the bundle. These include: Martin the Snail, Nathan the Patypus, Jim the Goat, Jack the Hermit Crab, Morne the Ostrich, Lemuel the Bat, Hansie the Hedgehog, Kepler the Lion, and Tiki the Clown. These will be some of the ones I will be working on in the next couple of months. 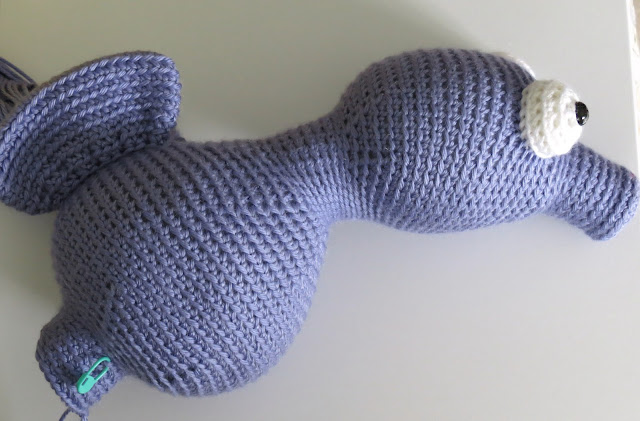 So I started the seahorse this weekend and I am very close to finishing I have already started crocheting the tail. This is so different from the other animals I have made because for the mouth on one row you work through the front loops then you continue crocheting and eventually attach to the back loops of that row.  I thought it was going to be complicated to do the mouth but it was actually easy one I understood what I had to do. This will most likely be finished for FO Friday. 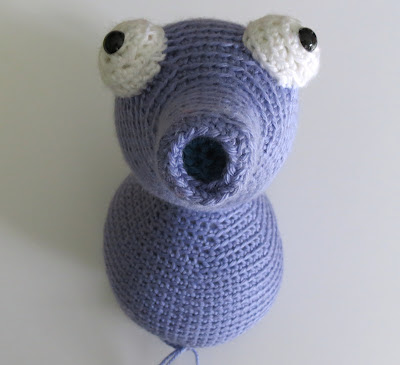 I almost can't believe that I would have only had one animal to show this week if it wasn't for Stacey asking me to test the bat pattern. I don't think I have ever only showed one thing so this would have been a first. The reason wasn't that I had a lot of things to do it was actually that I got my KnitPicks ball winder last Friday (which I talked about in this post) and since then I have been winding up every yarn and crochet thread I have found. If anyone whats to see them all together I am going to write up a post Sunday. The post is actually going to be about my new way of storing crocheted thread and yarn but I will be showing all the balls I have been winding up.

Posted by Adrialys at 1:36 PM
Email ThisBlogThis!Share to TwitterShare to FacebookShare to Pinterest