I have been crocheting a lot recently which is somewhat surprising to me because even though I know how to crochet very well I usually don't do a lot of it. I am more into knitting. I have a couple of crochet projects to show but haven't gotten around to photographing them yet because I want to block them first. Its going to be my first time trying to block them so I hope it goes well. 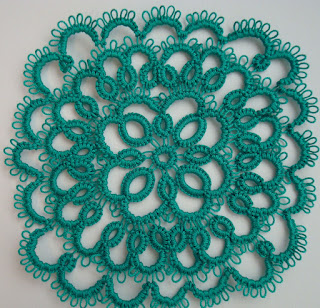 But I do have something to show right now that I completed last night and its my first completely finished tatted doily! I know I showed a different doily I was working on in another post which by the way I haven't worked on since but like I showed in another post I have new Lizbeth thread and couldn't help but start another project. I was so excited with it that I actually completed this one first. Mostly because it was only four rows. The pattern is from The Ultimate Book of Tatted Doilies by Annie's Attic. It's Square Doily #4 designed by Denise Giles. Its very small but very pretty. I already have my eye on a couple others from this same book so hopefully I will have those to show soon. I used Lizbeth thread in dark sea green which is number 688 and its needle tatted. Now that its finished it measures 4 inches across so you can imagine how small it really is so I am actually thinking of adding a couple of more rows. I am thinking at least 4 more in order to make it a nice size but I haven't decided if I will or not.

Posted by Adrialys at 4:15 PM
Email ThisBlogThis!Share to TwitterShare to FacebookShare to Pinterest